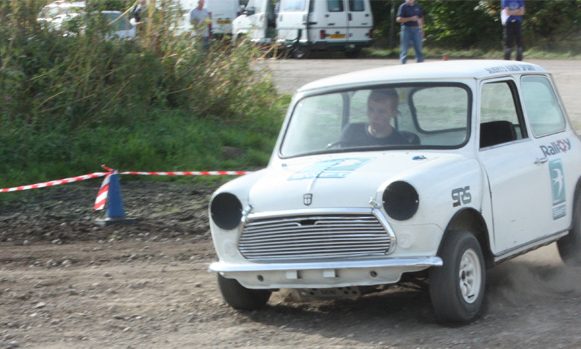 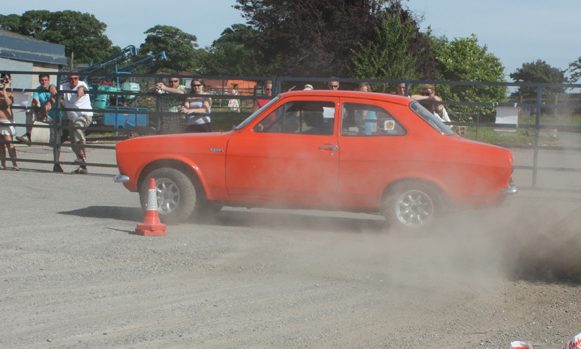 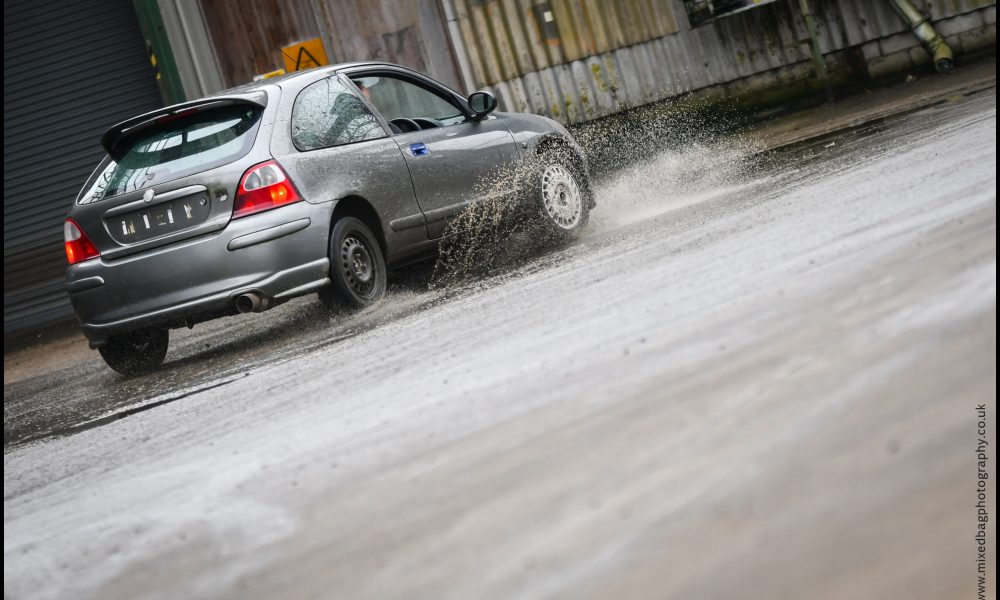 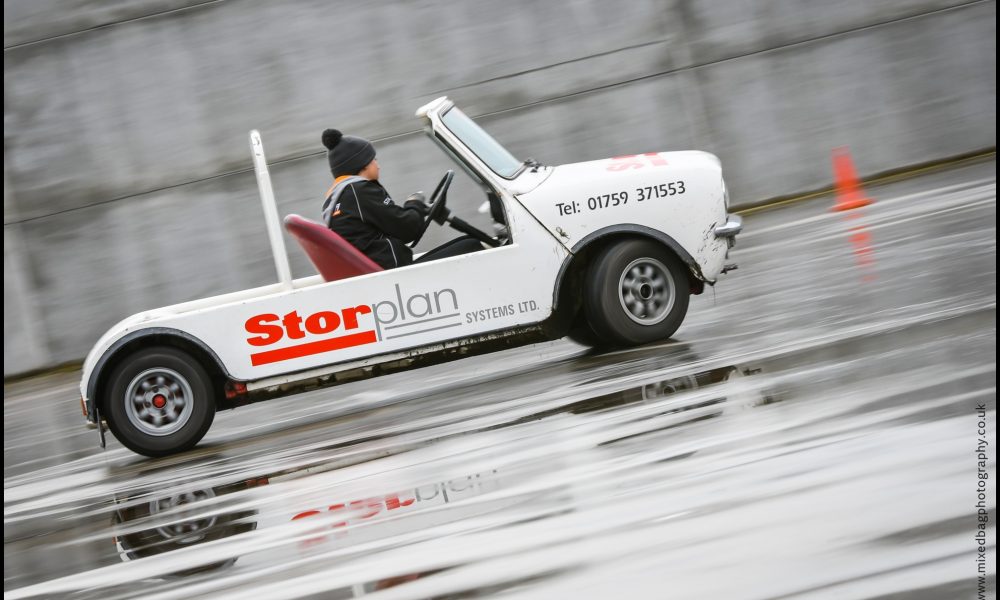 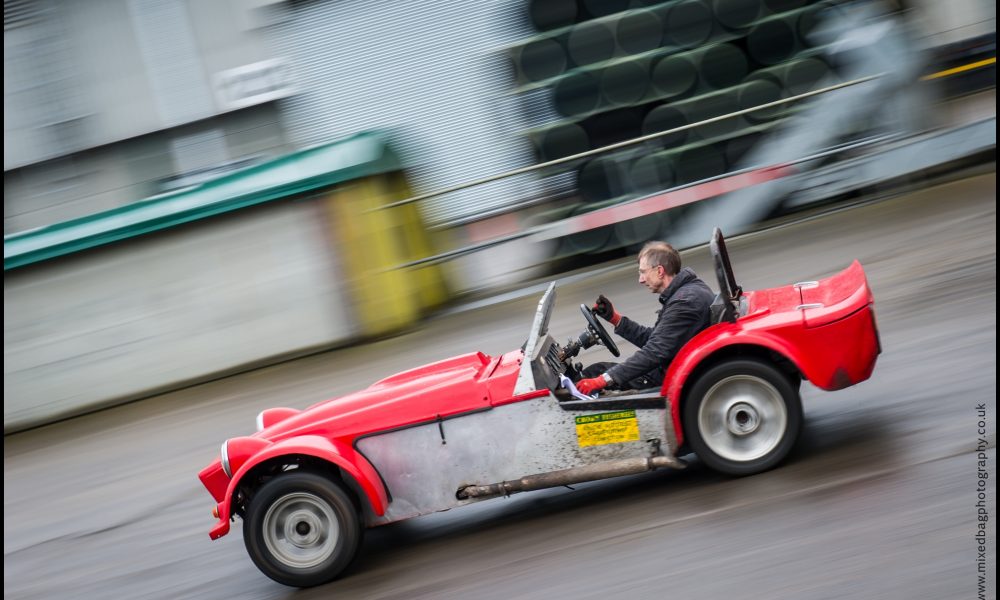 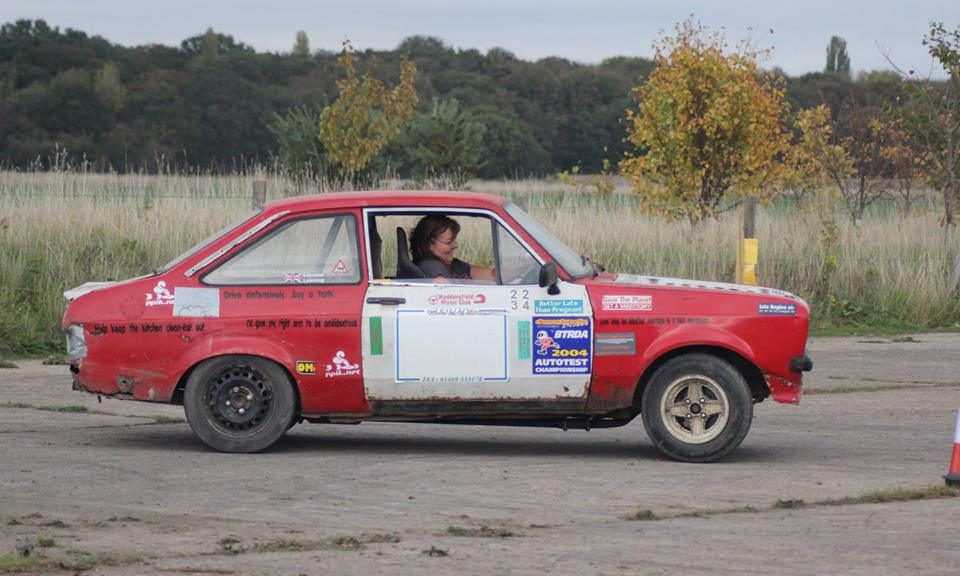 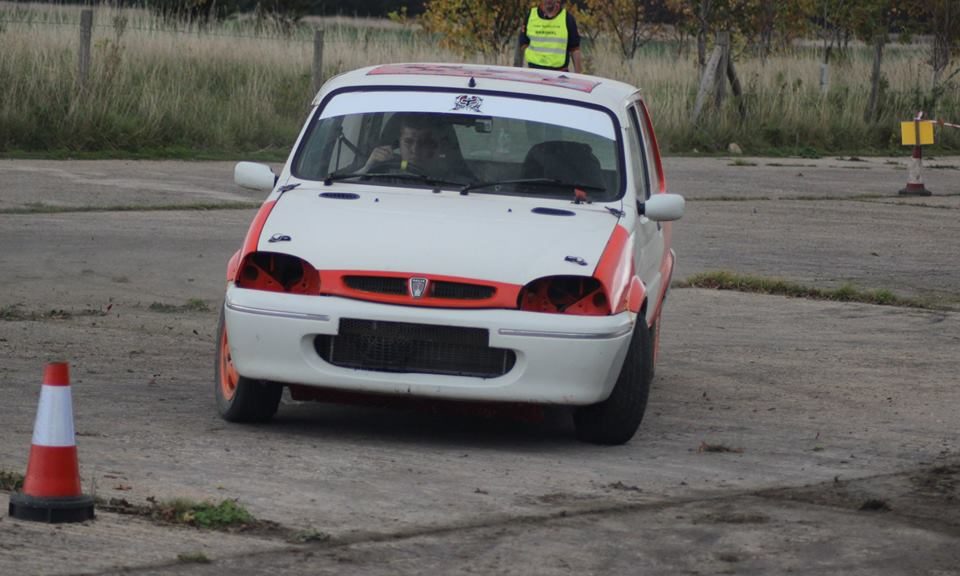 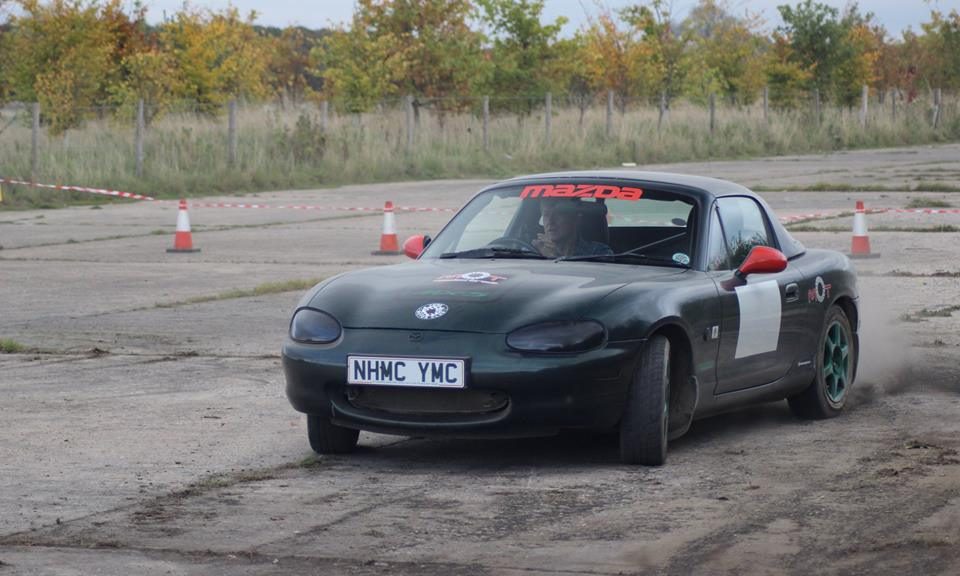 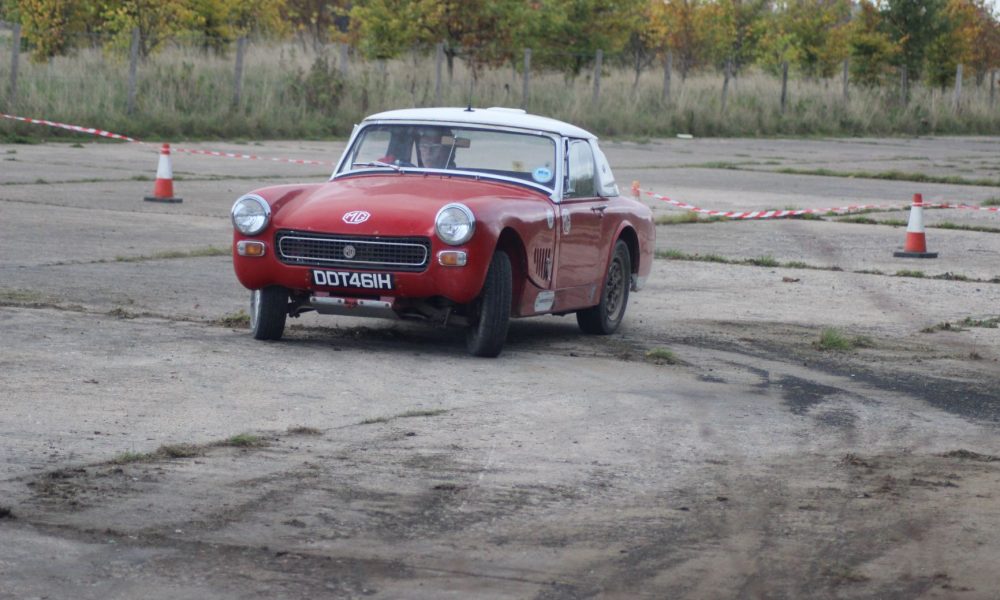 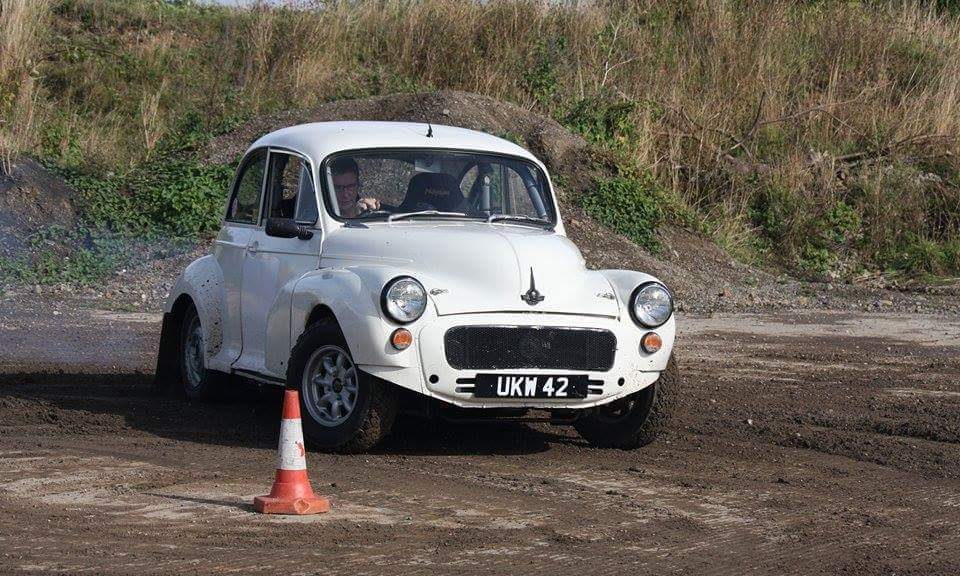 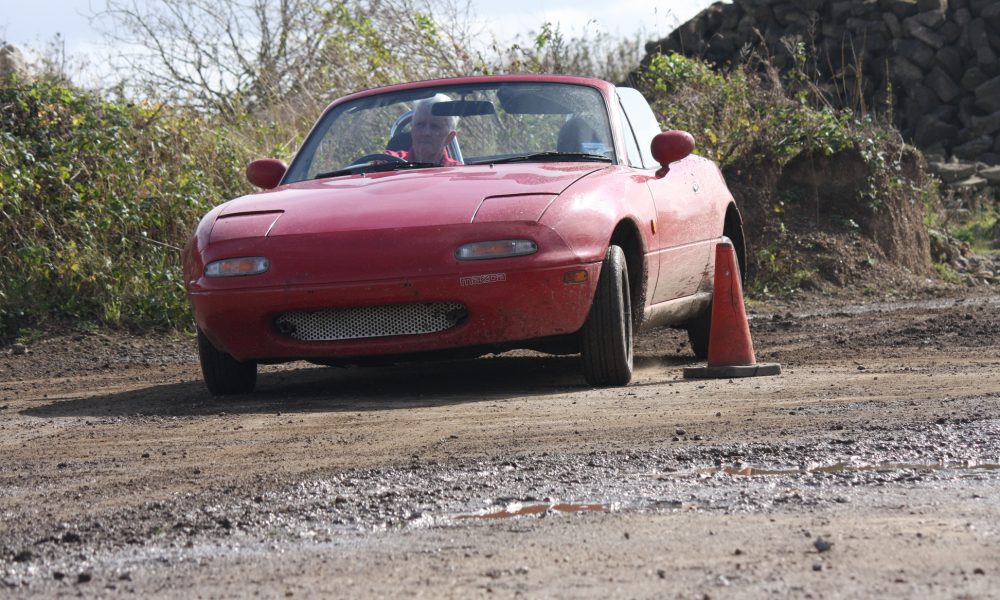 The January Clubday was held at ACASTER and on the 16th, organised by Neil Raven, nineteen competitors turned out for a great mornings motorsport.

For the results Click on the red link above

What a great start to 2022 – 19 entries & happy smiling faces at the finish thanks to Neil & his band of marshals.

2 conventional tests & 1 longer rally style test which did cause a bit of a bottleneck but sure no one complained !!

Despite having southern origins Neil has embraced the Yorkshire culture ( if not the accent) of getting the most for your money & use of the site – this extended into the B a N resulting in even bigger smiles & was eventually won by a determined Chris Walker – well it was set by an MX5 driver. We finally finished at 2.30 which just gave time to wash the car before it got dark.

How refreshing to see the improvement in our junior competitors Oliver & Megan – think Olivers mum is taking tranquilisers before the next outing to calm her nerves !

I know you are all waiting for the results to see if you are organising the March event – no reflection on Andrew Cohen who has taken over the results from Malc but a delay has been caused by introducing a class 6 which has meant reprogramming the system to accomodate it hence the delay.

I anm busy rewriting the event regs to take into account the recent changes. Apart from the new class 6 we are basically bringing our regs up to mirror those set out by our ruling body MSUK who issue the event permits & insurance. There are no major changes but all will be explained to you soon which I think is for the better.

The February event will be at Acaster on 20th February. The bad news is that as Ray is away so implimenting the new simpler entry system will not happen before March , you are stuck with me as entries sec. etc for another month. The revised regs will be circulated soon.

Held on Sunday the 12th at Acaster, 17 competitors turned out in reasonably dry weather for the last event of 2021. For the Results click on the red link above.

Held on Sunday the 14th at Acaster Ray Jude The Unofficial provisional results (which were correct) after a count up on the day were 1st Gary Hodgson in the Very Special KA, 2nd Ben Jude in the AXe, 3rd Neil Raven in the MX5 WRC. Test sites 1 & 3 were a clean sweep of fastest times for Gary, but the 2nd test site seemed to suit the MX5 WRC very well and some bales got very frightened

in the course of Neil Setting three fastest times. For the Official Final Results click on the Red link above.

Held on Sunday the 17th at EASTMOOR – Ian Young organised three interesting tests on a very greasy / mossy surface, creating a lot of fun for the rear wheel drive (MX5) contingent! – For the results click on the Red Link Above

STUART’S RECAP –
Well what a good morning we had at the October Autotest at Eastmoor. Thanks to Ian for organising the tests – obviously in one of his sadistic moods when he planned Test 1 site to make sure he used all the most slippy area of the whole airfield. Two of the MX5 brigade even did an extra 360 just for the hell of it ( or was it brain fade !! )
One new young starter Megan Walker accompanied by her dad Mark managed all the tests with no fails & hopefully will return – they must be keen as they live near Bridlington. Kevin Hardwick who entered the All Day ( & won his class) made the long journey from Mansfield detouring to Hull to pick up his son Alister up on the way & again drove very impressively to be 3rd overall. Along with the “Mathison’s” & our Hull area competitors we do seem to be attracting competitors from far away. Talking of the Mathison’s they missed October because both Dad Mark & son Oliver were competing in a PCA held in a quarry in Wales – looks a great venue – they both used their Road Rally/Targa Proton with Oliver beating his dad & winning driver of the day – well done Oliver – must be the experience gained doing our clubday autotests.
Gary Hodgson won overall & Class 4. 2nd was young Ben Jude ( coming home from Uni specially to compete) who won class 2 & more recently has competed in a National Championship at the new MSUK HQ at Bicester Motion near Oxford – again clubday autotests are his training ground) Class 3 was won by Neil Raven in 7th overall despite a fail or two. Gary Wrigglesworth performed very well but a fail dropped him to a lowly 16th but with Megan being the only other class 5 competitor he still won the class. Bob a Nob was won by Kevin Hardwick but the MX5,s provided the most entertainment.
There is no stopping Ben in the AXeman challenge & likewise Neil in the MX5 challenge

THE CHRIS LEEMING MEMORIAL AUTOTESTS AND SEPTEMBER CLUBDAY AUTOTESTS WERE HELD ON SUNDAY 19th SEPTEMBER AT ACASTER – Click on the red link above for the results.

The August Event was held at Full Sutton (South “Pond” End) on Sunday the 15th, organised by Gary Hodgson, Ten entries turned out with a welcome return of Ian Young in his Mini Special, quickly getting back into things and after a close battle with Joe Gamble, setting up fastest time of the day. Results can be found by clicking on the link ABOVE.

The July Clubday Autotests were held on Sunday 11th July at Rufforth old Airfield ( Potato Store Area) organised by Joe Gamble. Seventeen competitors turned out, The results can be found by clicking on the red link ABOVE.

Stuarts Recap – Well the dust has settled  on the July Autotests – yes we did have dust ! and what a great mornings motorsport we had. 17 entries including 3 class 5 with passengers.

Joe set up 3 good tests, 1 on good concrete, 1 on tarmac & loose and 1 on good tarmac with 2 of the tests including some reversing with quite a few fails & + 10’s to upset the results.

Bob a Nob was a modified & extended Test 1. That man Raven was fastest but with a 2 sec handicap the win went to Andy Brown in the orange MX5 who pipped Ray Jude by 3/100 sec. !!!

Biggest dust cloud & longest sideways slide easily went to Alastair Brown on Test 2 – in his words maybe not the quickest way but certainly the most fun ! – certainly looked good.

The  Axeman challenge is looking a bit one sided with Ben winning again & Neil is well in the lead in the MX5 challenge.

Thanks to Joe for organizing , Bill ( Joe’s dad) Malc for marshalling & Jazzy Baz for filming ( on his facebook site) & sorting all the equipment.

The June Clubday Autotests were held at Acaster West, eight competitors turned out on a hot dry morning, dust was a problem for Gary Hodgson in his open Ka special but he persevered and pushed Andy Brown into second place by less than 2 seconds.

STUARTS RECAP – 8 competitors enjoyed some good tests laid out by Malc Skilbeck who stood in for Steve Smith who had an unavoidable change of plans. We knew entries would be low due to a clash with a grass autotest organised by A & P to which some of our regulars decided to attend but we had hoped for 10 – 12. It was looking like 4 or 5 at one stage but a welcome returning Karl Hunter & the Sutton duo saved the day. Gary Hodgson won the event & also the B a N ( thanks Gary for donating your winnings to the club) No Axe man challenge this month but hopefully they will be at the July event. The MX5 challenge was always going to be a battle of the Browns & it was ! But for a fail “Brown Senior” would have taken the honours but as we all know ” buts & ifs” don’t count so “Brown Junior” won the day. I trailed behind but was pleased with my slow improvement taming the Jap beast.

The results can be found by clicking on the red link ABOVE.

The May Clubday Autotests were held on Sunday the 16th May at Acaster and were organised by Steve Smith.

Bob a Nob was won by Ben Jude finishing 0.8 sec ahead of father Ray Jude.

The results can be found by clicking on the red link at the bottom of the page.

The April Clubday Autotests were held on Sunday the 18th April at Acaster, organised by Steve Morten, nineteen competitors turned out on a clear sunny morning – for the results click on the red link ABOVE.

For October Clubday Results – Click on the Red Link ABOVE

Autotest events consist of a number of short courses or “tests” made up usually of traffic cones. Competitors are given a defined route, which they complete against the clock, using forward and reverse gears. Time penalties are given for collisions with bollards or failing to complete the course correctly. What type of  car?

Nothing special, in fact any car that is deemed safe by the organisers. There are people out there competing in cars they have bought for as little as 25 pounds. Autotesting is “grass roots” motorsport. Entry fees are cheap, events are held on private property, no special licence is required at inter-club level, no special car is needed. This type of motorsport is without any doubt, the best and safest way to learn car control, and a great introduction to other forms of motorsport.

How do I find out more?

Simple, Come and meet us socially, every Wednesday night, 9.00 p.m. Details of where we meet can be found here  Better still come down and visit our next club day. We will be pleased to help you with any questions you may have, and provide you with a copy of our clubday rules. Alternatively, you can contact one of our experienced club day organisers,

Find out more about what we do and who we are.